14th January 2016.
Every year Port Hedland Seafarers Centre will pack and distribute thousands of Christmas gift bags to Seafarers who will be berthed in the harbour or on standby at anchorage, up to 42 kilometres out to sea. The below video and photos are an insight to this massive undertaking.

9th September 2015. By Judy Wells
Committee and staff members were thrilled to find the Seafarers Centre nominated as finalists in the following three categories of the 2015 Port Hedland Business of the Year Awards,  held at the Walkabout Hotel on August 29thTheme of the evening was A Night In Paris and guests dressed accordingly.
Due to the success of our Harbour Tours, most felt we could surely win the Tourism award, however it was not to be.   Any disappointment was quickly put aside when the final award of the night, The Inaugural Peoples Choice Award was announced, and the winner, The Seafarers Centre.
The Seafarers Mission  is unashamedly a Christian organisation and we must thank God for the vision of the harbour tours but we also  send a huge thank you to all our staff, committee members and all associated with the Centre.  To win this award is a sign that we are succeeding in our efforts to welcome both Seafarers and visitors, and continually working towards looking after the welfare of the Seafarers.
Feedback from our Harbour Tours includes words such as awesome, excellent, impressive, and wonderful, whilst every day our efforts to help the seafarers are rewarded with happy smiles and thank you's as well as thank you emails from many Captains of the visiting ships. 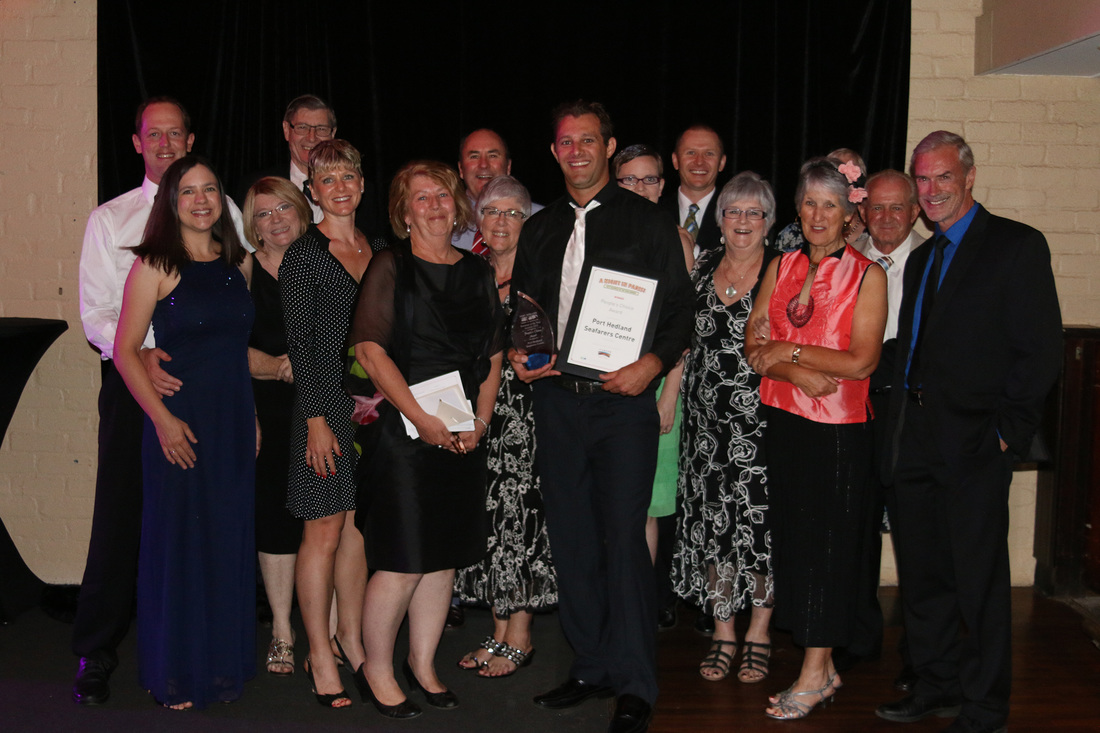 16th August 2015. By Isle Gosper
Royal Australian Navy vessels seldom visit Port Hedland (the previous one was in 2013) so it was a great opportunity when HMAS Sirius came to Port Hedland earlier this month for a few days.
The navy cadet unit in Port Hedland, Training Ship (TS) Pilbara immediately liaised with the HMAS Sirius and Pilbara Ports Authority to organise a tour for the Navy Cadets.
The logistics of organising the visit included gaining permission to access the wharf where HMAS Sirius was berthed.  Private vehicles are not permitted and it was a great relief when the Port Hedland Seafarer’s Centre agreed for the cadets to utilise the Seafarer’s Bus for the ship visit.
Thirteen TS Pilbara cadets, 2 staff and a few parents and siblings boarded the Coaster bus after meeting at the Seafarer’s Centre, passed through the security gate with their IDs in hand, and proceeded to berth PH1.  The duty officer and crew of HMAS Sirius welcomed the cadets at the gangway and gave a very informative tour of the ship.  An hour later the tour was over, the group returned to the bus and headed back to the Seafarer’s Centre.
It was an interesting afternoon which would not have been possible without the assistance of the Seafarer’s Centre.  The TS Pilbara cadets enjoyed the tour immensely and it was an opportunity for many of them to discover what the Centre offered to the seafarers. 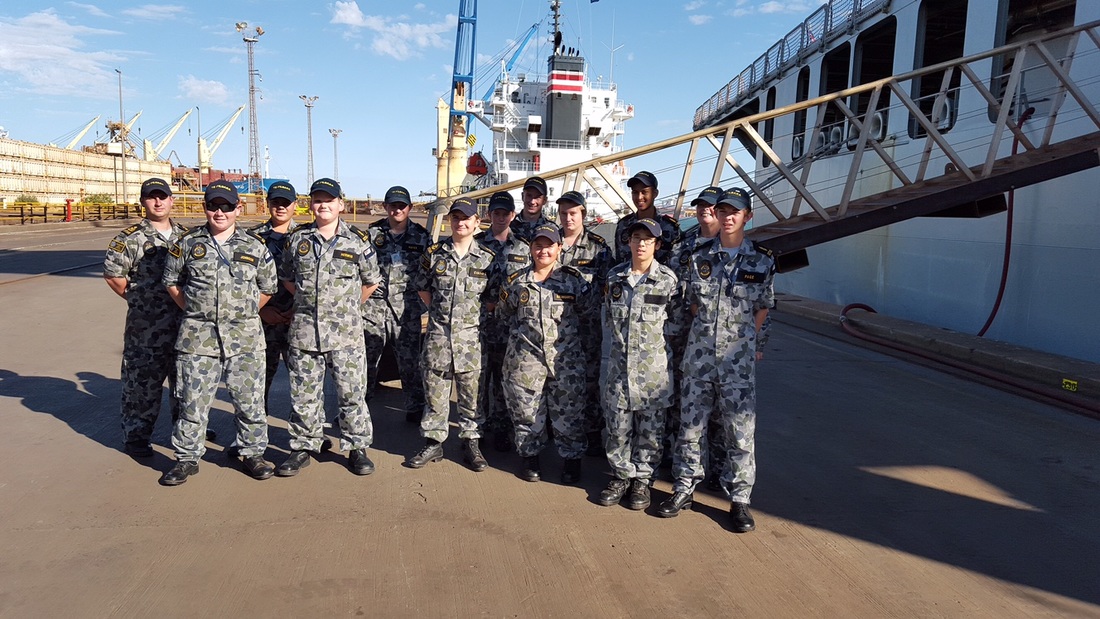 The Port Hedland Seafarers Centre is excited to announce that Starting in June 2014, the centre will be offering Daytime Harbour Tours to the general public. Get up close and personal with the huge Iron Ore Ships in the Port Hedland Port, on our working seafarers launch boat. For more information, please Contact Us or visit us at the Seafarers Centre.

The Port Hedland Seafarers Centre has a new VHF Radio channel for Ship to Centre communications.
To contact The Port Hedland Seafarers Centre via radio please use
VHF Channel 77
This channel will only be manned during opening hours. The old channel is no longer being monitored. Of course, you can contact us via other methods also. Please have a look at the Contact Us page for more info!

In this moving piece, Adrian Plass paints a picture of the work of the Sailors' Society as it seeks to help the world's seafarers who﻿ often face extremely difficult conditions. The Sailors' Society is an organisation much the same as the Mission to Seafarers.

12-07-2013 - The Port Hedland Seafarers Centre has added additional bus and launch services to their already busy schedule.
The bus will visit PHPA and the supermarket, while the launch will attend to the ships at berth.
For Bus and Launch times, please contact the friendly staff at the centre or download the Bus Service or Launch Service document on the Services page.     Goto: Contact Us

In and Around the Seafarers Mission - with Associate Chaplain Garry

Presentation from the MV Nord Hercules

Some of the crew of the MV Nord Hercules presenting their ships photo for the Mission Gallery.

Presentation of bibles to Seafarers

Chaplain Garry precenting Philippino crew with Gideon Bibles. The Bibles were donated to the Seafarers Mission by the Gideon’s to give out to Seafarers. 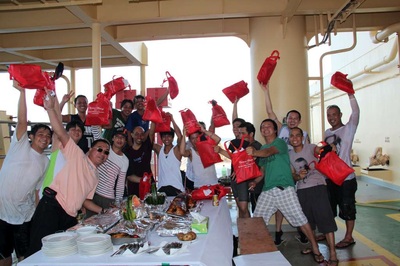 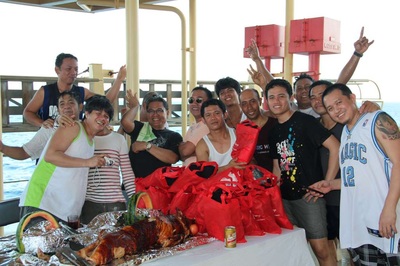 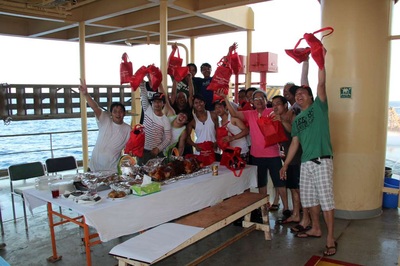 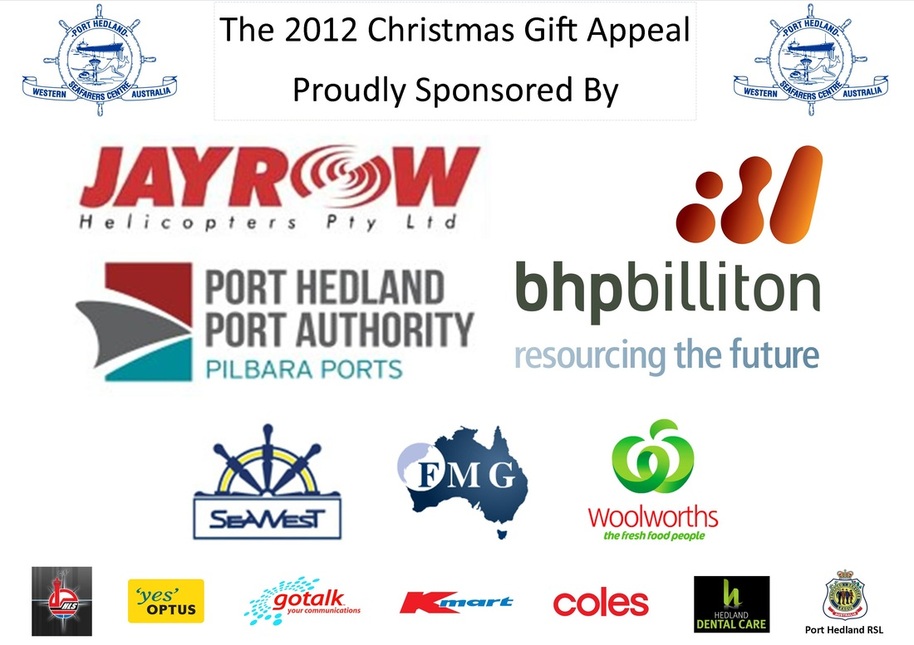 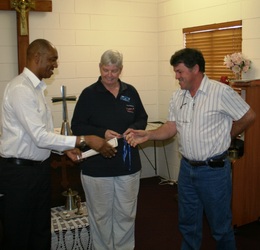 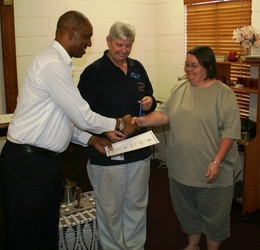 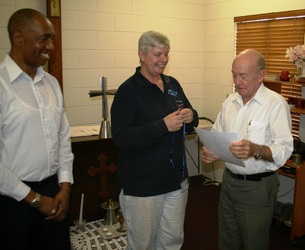 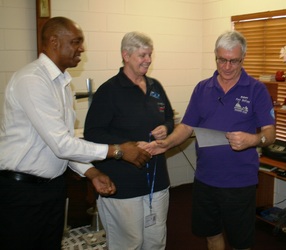 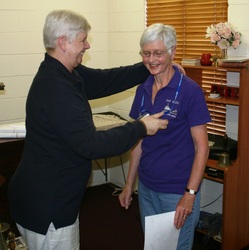 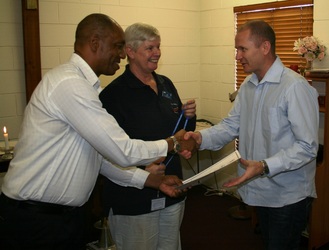 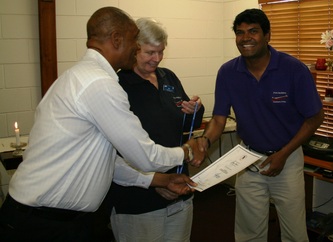 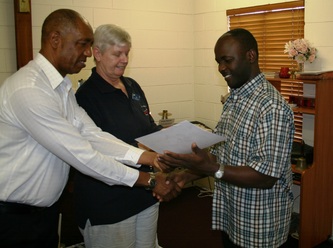 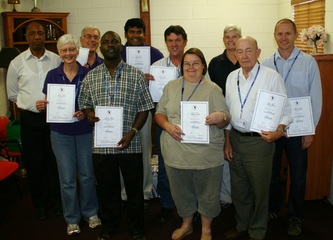 A video produced by a crew member of the MV Polymnia, Journey 5.0 "Seaman's Life", gives a glimpse into the lives of Seafares on working on-board bulk carriers throughout the world. The 7 part documentary was originally produced for the friends and family of the Seafarers serving aboard the MV Polymnia. 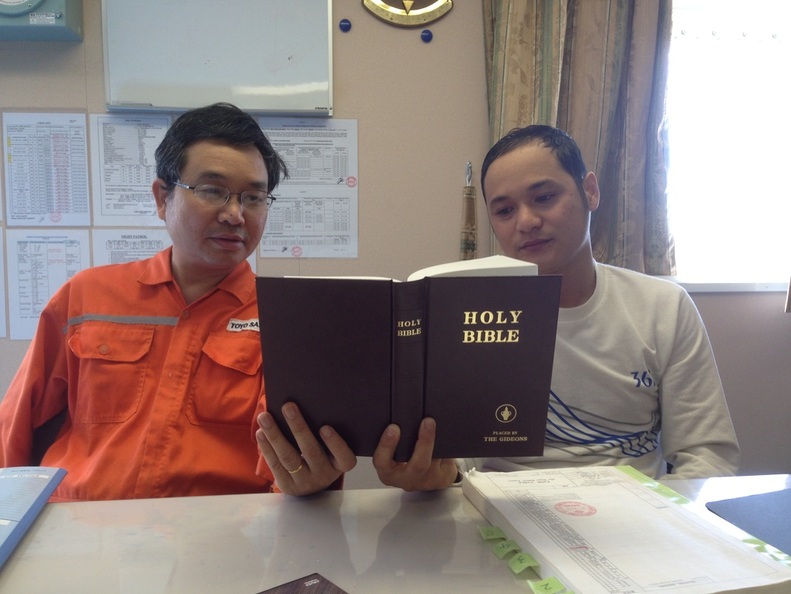 The Chief Officer of the MV Ocean Lady receiving a Jesus DVD from Assoc. Chaplain Gary. 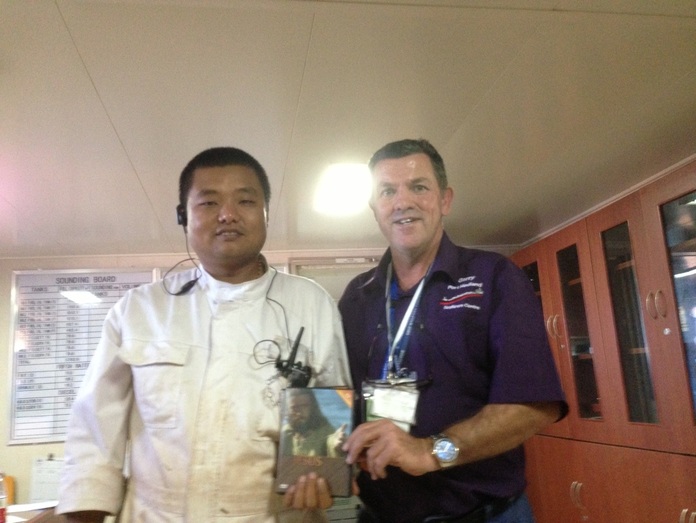 Ship Visit to the Daniel N

Every now and then we get thanked for our work with the seafarers. This is one of those times. A group of the mission's staff were treated to a tour of the ship and to dine with the master, officers and crew, with much delight to the taste buds.

A big thank you to the Daniel N for their hospitality.

Presentation from the MV C Frontier

The crew of C. Frontier precented Assoc. Chaplain Gary with a model and plack of their Ship for display in the Port Hedland Seafarers Centre. 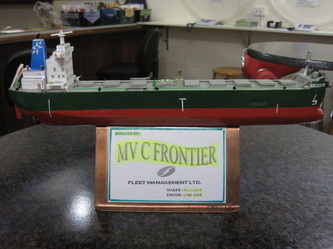 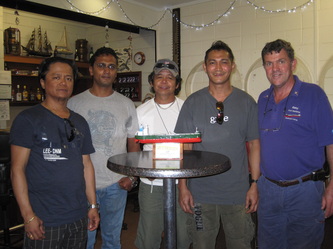 Maker of the model: Rullskie

Presentation from the MV Mairaki

April 2013, the Captain and crew of the MV Mairaki presented a framed photo of their Ship and crew to the Seafarers Mission for the ‘Hall of Fame’.

From left to right: Captain of the MV Mairaki, Assoc. Chaplain Gary and Crew members

Presentation from the MV Ocean Creation 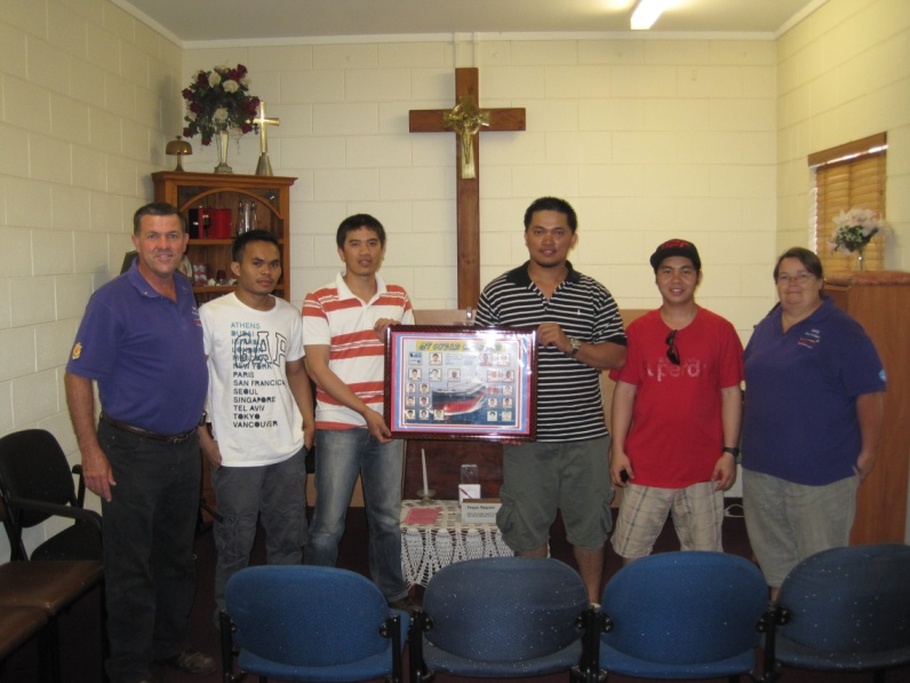 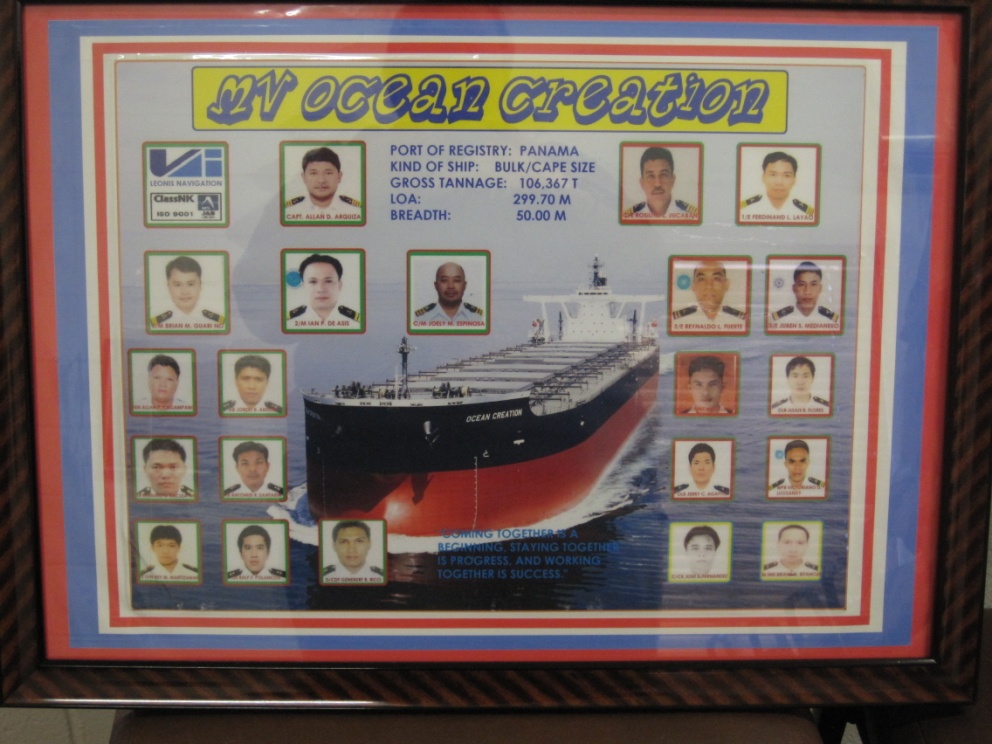 Blessing of the MV Tonda Sea

09-04-13 - The Port Hedland Seafarers Centre now has an updated Postal Address.  Only our Post Office Box number has changed. All other details remain the same. The new address is as follows:

Please be sure to update your records. We would hate to miss out on any of your mail! Our other contact details can be found on the Contact Us page.

01-04-13 - The Port Hedland Seafarers Centre is now capable of moving more seafarers than ever, with the recent arrival of its new bus.  The Chinese built BLK bus can seat 43 seafarers comfortably for transfers to and from the Public Jetty, Mission, Shopping Centre, Airport, or wherever they might want to go!

Track the location of ships in the port and anchorage live!

19-12-12 - You can now track all the ships docked in Port Hedland and waiting in anchorage in realtime! Thanks to the Port Hedland Seafarers Centre, you can now view the details of visiting ships from any internet enabled browser! Using the Automatic Identification System (AIS), which was initially intended to help ships avoid collisions, can display Speed, Direction, Destination and more on an easy to use map. To use this great service, just click on the Live Ship Map (AIS) for Port Hedland link on our homepage.